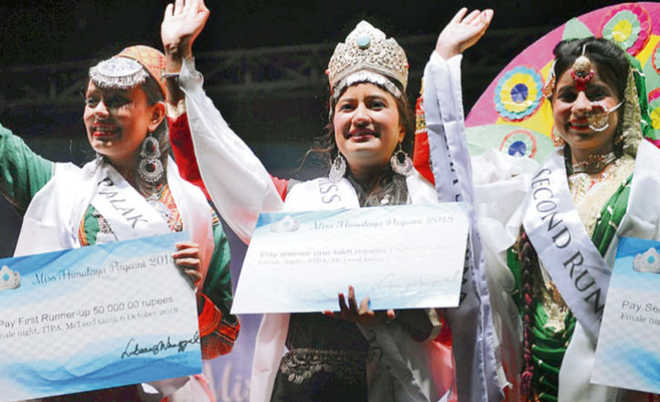 The winners of the Miss Himalaya Pageant 2018 on the dais. MHP

By RK Prashar | The Tribune

The eighth edition of the Miss Himalaya Pageant is all set to be organised in McLeod Ganj on October 11 and 12 despite a fund crunch. There are eight contestants from Himachal and Uttarakhand vying for the crown.

Launched by Lobsang Wangyal Productions in 2012, the pageant aims at empowering young women from the entire Himalayan region, promoting regional culture, preserving its environment and fostering friendship among Himalayan people.

The pageant brings on one stage women from Ladakh to Arunachal Pradesh. The Indian Himalayan Region spreads through 10 states — Jammu and Kashmir, Himachal Pradesh, Uttarakhand, Sikkim, Arunachal Pradesh, Meghalaya, Nagaland, Manipur, Mizoram and Tripura, as well as the hill regions of Assam and West Bengal. Young women from Bhutan, Nepal and Tibet are also welcome to participate in the pageant.

Over the years, contestants from Himachal Pradesh, Uttarakhand, Jammu, Bhutan, Sikkim and Arunachal Pradesh have taken part in it. The winner of the pageant each year receives a prize of Rs 1 lakh, the first runner-up Rs 50,000 and the second runner-up Rs 25,000.
Finances have been Wangyal’s main issue, but still he has kept the project alive by taking loans or paying vendors later.

The only support this year came from a Tibetan family, which runs a cancer clinic at Sudher village, near Dharamshala, in the form of Rs 50,000 in donation.

Wangyal calls himself a small-town impresario. He started producing events in 2000. Since then he has produced the annual Miss Tibet Pageant, which has become a much-awaited event in McLeod Ganj.

Because of his experience, he sounds relaxed and says all that needs to be done has been done. Good planning and starting early helps in getting work done on time. “Much of the work has been done, but the funding part is still behind. I am still working on it and hopefully, I can pull enough to break even.”

Since its inception, the pageant has taken place only in McLeod Ganj. He wishes to see it moving around to a different Himalayan town each year. He says this will become possible if the community comes forward to support the event.

The contestants will go through four rounds of tests in Talk, Talent, Traditional Costume, and Interview, to be judged by a three-member jury. The winner will be crowned by the outgoing title holder, Ritika Sharma.

The famed and much-hyped Miss Tibet Pageant, which in the early years made headlines scream in the global media, finally met its end in New York last year, all because of the apathy of orthodox Tibetans. This year, however, for the first time, the tacit official nod of the Tibetan government in exile will encourage the organisers.

Wangyal was upbeat ever since the Deputy Speaker of the Tibetan Parliament-in-exile, Acharya Yeshi Phuntsok, consented to be the chief guest at the Miss Himalaya Pageant.

The finale will be held on October 12 at the Club House in McLeod Ganj, upper Dharamsaala, with a makeshift stage decorated and glittering with lights.